The School of Spanish at Home

¡Buenos días! How are you getting along with this self-isolation experience? I hope you are all doing great and enjoying lots of learning with your family.

We have been learning parts of the body for a while and we were just starting to learn how to describe people (in crazy ways as usual!). I thought that we could continue this at home.

Activity: download and print off the Word document at the bottom of this post. You will find in it two pictures: one of a boy and one of a girl. Choose the one you lik the most, colour it in neatly.

Alternative: if you don't have a printer at home, you can either colour them in on the computer (i.e. right click on the picture in the doc, click on "copy", open Paint, click on "Paste", done), or you can draw your own picture if you want it better that way (just make sure that it occupies the whole blank A4 sheet).

Once you are done with the colouring, it is time to describe your picture. We will make a video of us describing two or three parts of the body from our picture, loud and clear. To assist you in the endeavour, I have revised and improved our description frame: 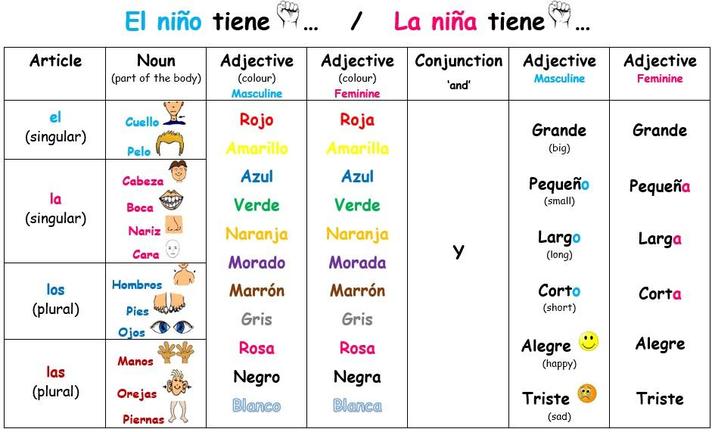 As you can see, this looks so much better and easy to use. Let's break it down so you can do this independently and confidently:

- Every sentence must start with either "El niño tiene" (the boy has) or "La niña tiene" (the girl has), depending on the picture that you chose to colour in. Please check the 'Pronunciation Rules' section below.

- Definite articles: next we must use the correct article for the part the body that we want to describe. To make this easy for you, I put them next to each other so you know wich one to use. Examples: las manos, el pie, la cabeza, los hombros. For a better understanding, please read carefully the 'Word Agreement' section below.

There are 4 definite articles in Spanish: "el", "la", "los" and "las". All of them mean the same in English: 'the'. There are two for masculine, and two for feminine. One is for singular nouns (singular means 'one' - nouns describing just one object or person), and another for plural nouns (plural means 'two or more' - nouns describing more than one object). Examples: we only have one head so that would be singular, while we have two shoulders which would be plural. I hope that makes sense for you, little ones!

- Adjectives: yes! In Spanish, we put the adjective after the noun. Now, here's a challenge for all of you: if the part of the body is masculine - colour-coded blue - you must choose a colours from the masculine column; if it's feminine - colour-coded pink -, then from the feminine column. For a better understanding, read the 'Word Agreement' section below.

- Conjunction: 'and' in Spanish is "y". Pronunciation is like "i" in Spanish (the squeaky mouse, remember?): something like a 'eh'.

- More on adjectives: same as with colours. If the part of the body that you are describing is masculine, then the adjective must be as well. Same goes for feminine. Make sure that the adjective that you choose makes sense!

First of all, our well-known phonics chart: 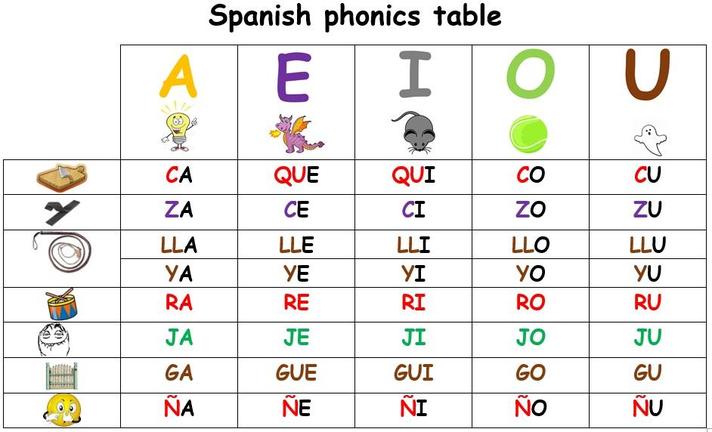 Practice the vowels first, then go through each sound. Don't forget the actions, look at the pictures (i.e. chopping board is /k/, velcro is a strong /th/, whip is a stark /ch/, drum is the rolling /r/ (monster face for this one!), funny-looking face is the gagging sound, gate is /g/, and for "ñ" hold your nose and say 'nia, nie, nii, nio, niu').

Important: we never blend vowels in Spanish. So, if you encounter a word with two or three vowels one after the other, make sure that you say them each separately. Example: "tiene" (has) must be said 'te' 'eh' neh'.

And last, but not least, the letter "h" in Spanish is silent. Exactly, it doesn't make any sound at all. Weird, isn't it?

In Spanish, as in many European languages, words must agree with each other if they want to get along. How do they do that? Well, first they must have the same 'gender', either masculine or feminine. To achieve some basic understanding of this, let's say that masculine words are 'boy words', and that feminine words are 'girl words'. So, if we have that "cabeza" (head) is feminine, both the article and the adjective must be feminine as well: "la cabeza pequeña" (the small head).

But, words are very choosy and need to agree in 'number' also if they want things to work out for them. Number is the genreral term for 'singular' (one) and 'plural' (two or more). Easy! Let me show you: we only have one "nariz" (nose), so that must be singular; but we do have two feet ("pies"), so that must be plural. Resulting in: "la nariz" and "los pies". As you can see, the articles and the nouns agree on both 'gender' and 'number'. Hooray! ¡Hurra!

- We will practice our sentences as many times we need to ensure the best pronunciation ever. It would be wise to write them down first using the writing frame and then practice reading them aloud.

- We can teach mum and dad so they can join us in the activity. How about that?

- Enjoy! Everything is better if we enjoy doing it, don't you think?

Once you have your video ready, you can either put it on Twitter (@ESPoppletonRoad), or upload it to your class' SeeSaw account (I am setting Spanish accounts for SeeSaw at the moment, but it will take me a while to get them all up and running. Please check for updates on this and more on the Spanish Class Twitter account).

Rewards: for a well done job you earn a certificate. I will post it on Twitter as a picture because, obviously, I won't be able to hand it in to you!

If you had any questions, needed support or resources, please send me a tweet. I will answer as promptly as I can.

More parts of the body

We will learn new parts of the body so we can describe people even better than we did in Spring 1: 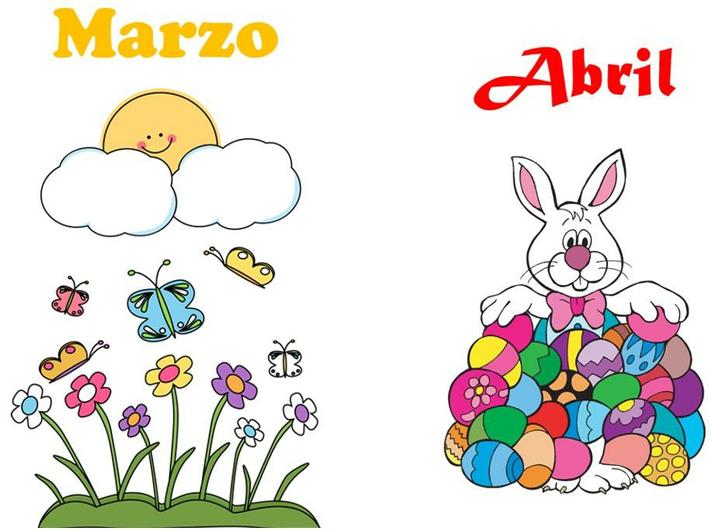 Can you read them correctly in Spanish?

The song is called 'Juan Pequeño' (Little John). I'm sure you remember how to sing it, so here are the 'lyrics': 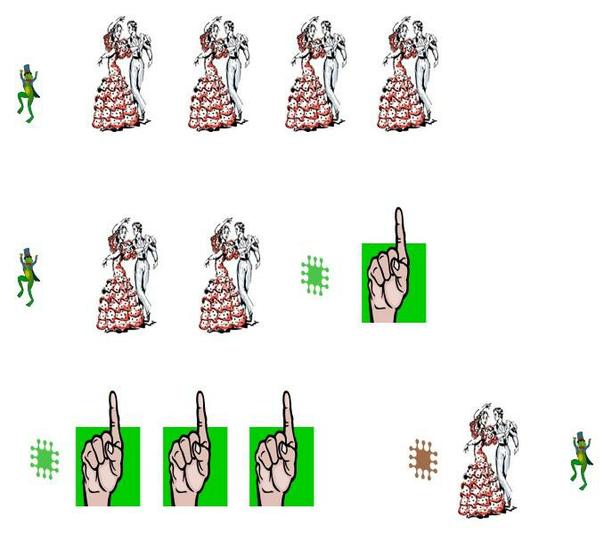 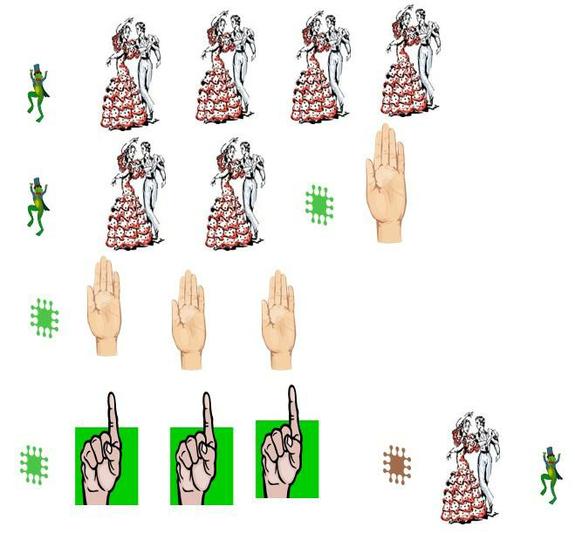 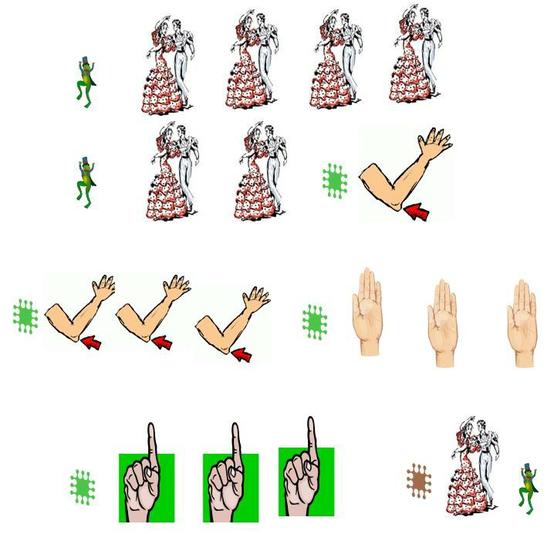 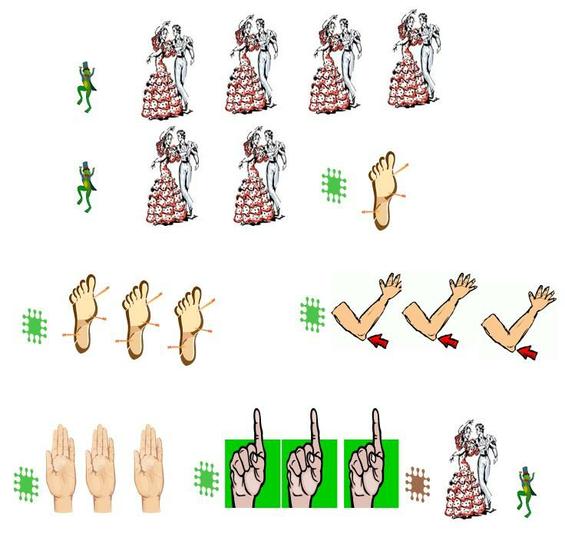 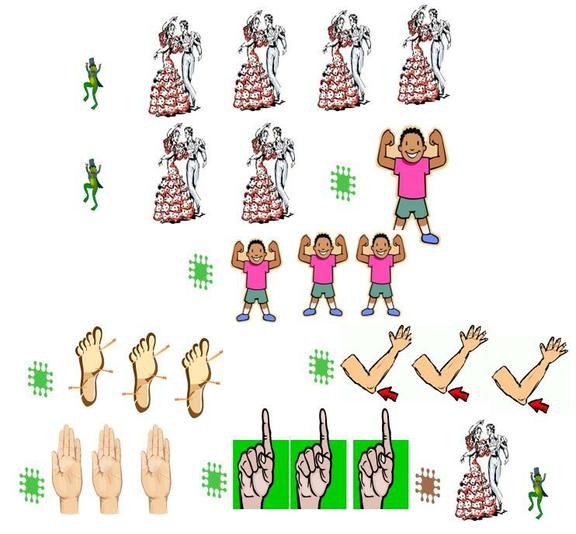 This is the mat that we will use to describe people this half-term: 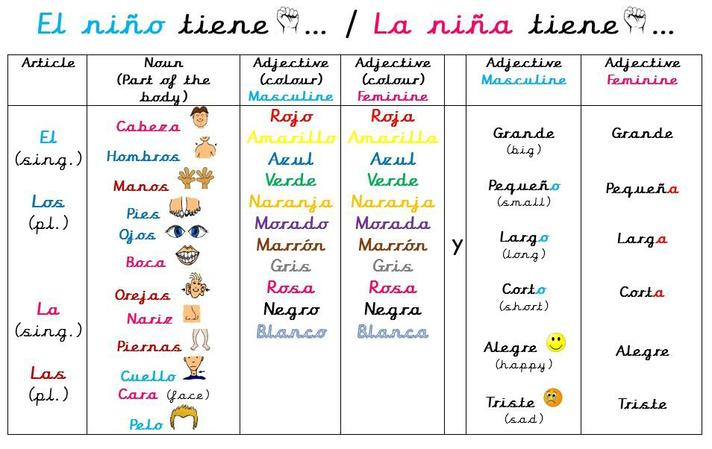 This half-term we are going to start giving proper descriptions in Spanish. So let's make it fun! We are going to describe monsters!

Parts of the body 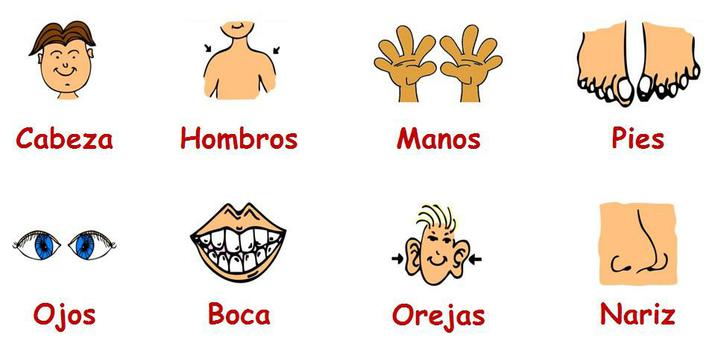 In Spanish, the order of words in a sentence is a bit different. To start with, adjectives come after the noun. Let's see a quick example:

We will describe crazy monsters and practice  this over and over.

We will see plurals for the first time. Don't worry! It's easier than you think. Here's a simple rule:

That way the colour "rojo" would be "rojos".

We will start using articles in Spanish. You will find that there are more than in English. In order to use them properly you will have to get familiar with Gender and how it works. Step by step. There's no hurry

How old are you? - ¿Cuántos años tienes?

The topic this half-term is simple descriptions using School Supplies and Colours. We will learn new words like "es" (it is) and "no es" (it isn't), using the definite articles "el" and "la" (both meaning 'the') and a little about Gender (Masculine and Feminine words). Does it seem to be a lot? No worries. It will be fun!

First, a quick reminder on colours: 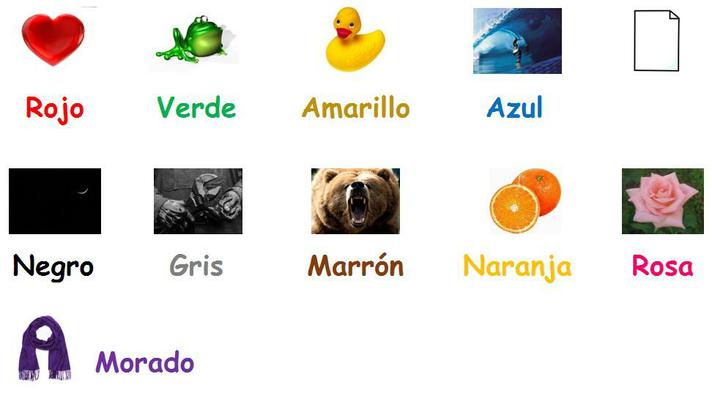 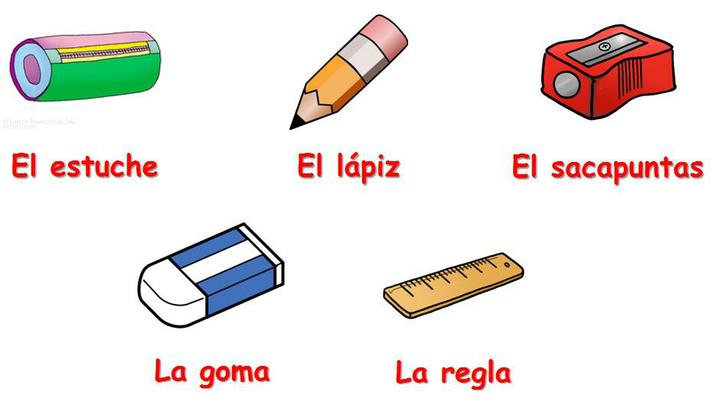 We will use the following structure:

We will do all this in a fun way. You'll learn it in no time!

Where are you from? - ¿De dónde eres tú?

Improve your conversation skills in Spanish by adding this new question and answer.

Learn Numbers 1-30 with this song!

¡Saludos Year 2s! Are you ready to learn Spanish?

We practised some instructions last year. Now, it is time to extend our vocabulary and challenge ourselves so we can say more and more in Spanish: 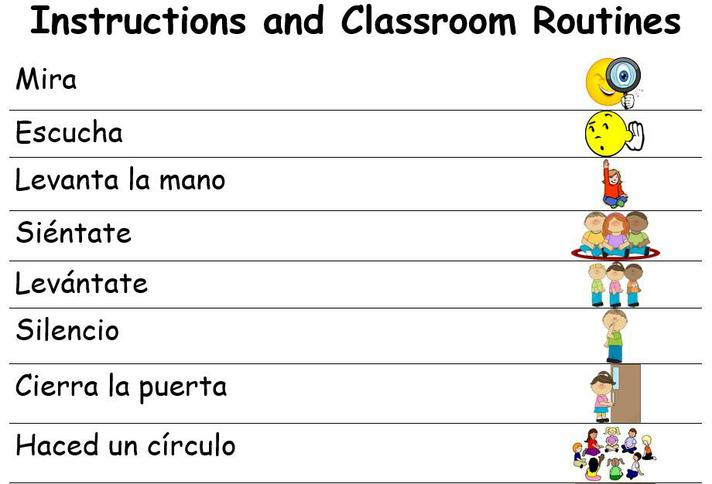 These are the first ones. We will use them in class many times.

There are lots of new numbers this year, but don't worry. We will learn them step by step. In the meantime, why don't you try practice at home? 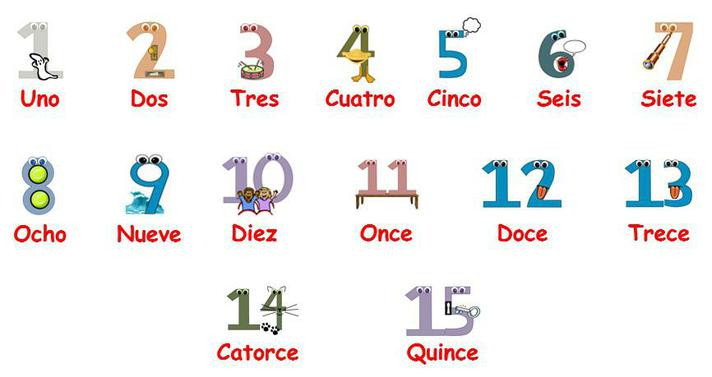 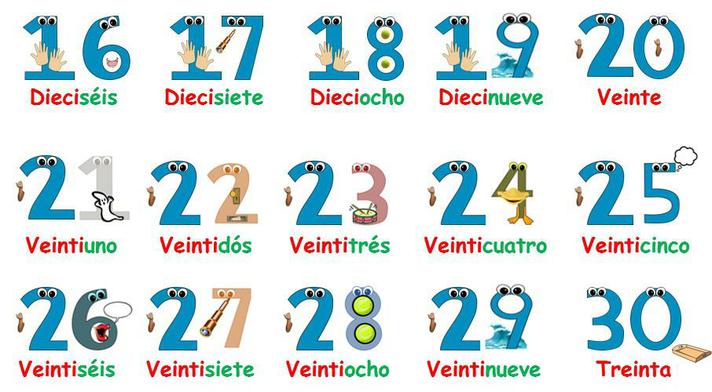 Check out the colour code of the number names from 16 to 29. Just learn the part of the word in red and add the numbers that you already know. Practise with the actions and you'll be saying them confidently in no time!

And now, a especial one: 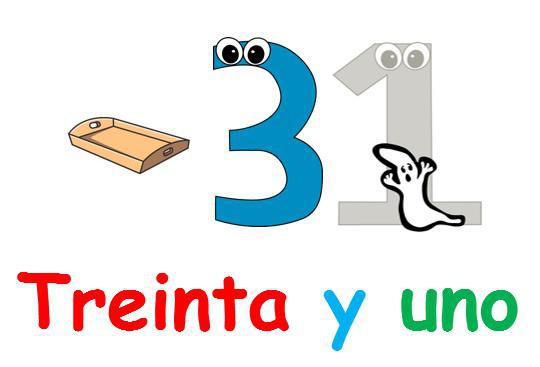 Does it look tricky? Not that much! Let's see:

Days of the week 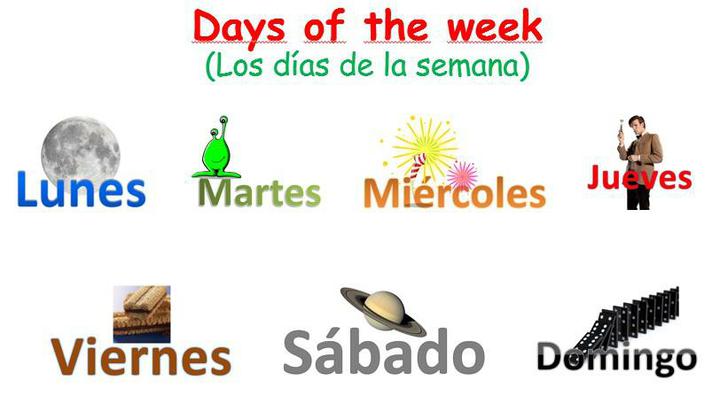 Some of them are pretty similar to English months 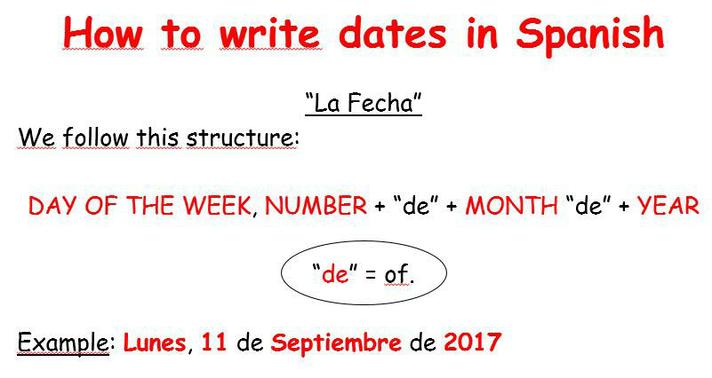 Don't you worry if you don't quite get it. We'll be practising this in every lesson.

Learn greetings and daily routines in Spanish with this fun and catchy tune!

Saludos Year 2s! Summer Term is here and the topic is... Animals! To start with, a very funny song called "El Cha-cha-cha del Cocodrilo" that you will find below this post.

These are the animals that we will learn:

I suggest you listen to the song first and then practice the names of the animals.

Here are the lyrics: Remember the actions when practicing!

Learn how to count to 20 in Spanish with Basho and his buddy Brobot.

What is your name? - ¿Cómo te llamas?

Unfortunately not the ones with chocolate chips.

Some cookies are necessary in order to make this website function correctly. These are set by default and whilst you can block or delete them by changing your browser settings, some functionality such as being able to log in to the website will not work if you do this. The necessary cookies set on this website are as follows:

A 'sessionid' token is required for logging in to the website and we also use a 'crfstoken' token to prevent cross site request forgery.

Cookies that are not necessary to make the website work, but which enable additional functionality, can also be set. By default these cookies are disabled, but you can choose to enable them below: